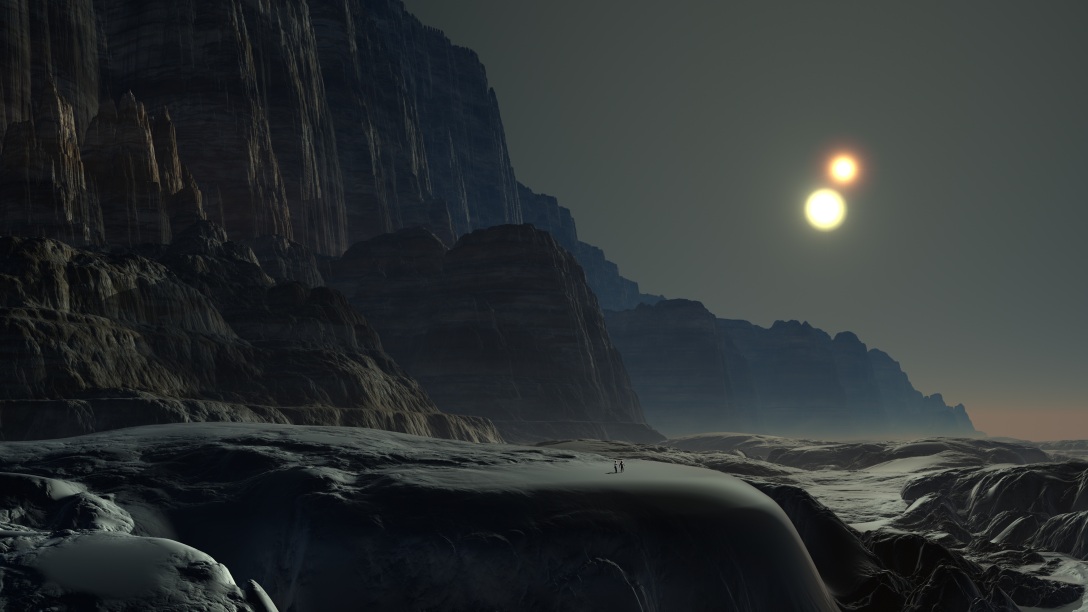 When I left research in 2018 to try my hand at fiction, it felt like I was making a huge course change in life.

The decision itself, the one to leave research, was simple. After all, the science of climate change—which I’d been working on—was settled, and more research would bring ever-diminishing returns on that. On the other hand, putting energy into fiction as a means of making climate science more enjoyable to talk about was a way to keep working toward greater sustainability. Still, I had no idea what challenges I’d face, and that uncertainty made the switch itself feel very dicey.

Now, for the record, there’re a fair number of science-y folks who have some book idea or other floating around in their noggins. This is how it goes—we work at our benches, or desks, or some field site or other, and in the back of our minds we think about the things we’d do if we weren’t so busy with our research. Maybe we’d find a little piece of land, buy a farm, keep a few chickens, have some buddies over now and again to bottle the latest batch of ale. Something like that. And we’d write a novel. That kind of thinking isn’t too uncommon as these sorts of fantasies go. Minus the farm, and the brewing, I took the plunge.

Fiction writing was new. A challenge. A good thing! And, as it turns out writing fiction really isn’t so different from basic scientific practices. That? That revelation, to me, surprised me to such an extent that I decided to blog about it.

Why did this revelation surprise me so? I think it’s because way back when, during my ‘formative years,’ there were science kids and there were humanities kids. I was the former not the latter. I recall a high school English teacher telling me, “You can’t write.” (her declaration of my lack of potential followed some writing assignment I’d turned in. It was full of castles and dragons. I suppose it was poorly written?) Anyway, maybe in part because of that exchange, I internalized that people are one, or the other. Sciences, or humanities. Different skill sets, I thought, and me, I was wired for science.

Obviously, a human being is not one or the other.

But at the time I guess I decided my strengths were in science. Yet, we all have some drive to tell stories, and we all have some drive to think logically. Mathematically. Scientifically. I’ve met writers with a heavy research bent, and for sure there are researchers who have great, largely developed ideas for novels. But nevertheless, scientific writing and fiction writing still seemed worlds apart to me, two fundamentally different things.

I mean, you could, at this moment, surf away from this blog to learn about the role of sirtuins in cancer and aging. You could. Your life might even be better for it, and some of you probably will. But my guess is that for many of us, the thought of reading about sirtuins right now is less exciting than reading a book from the New York Times bestseller list.

Fiction, baby, that’s where it’s at, that’s good reading! Good fiction is different than science writing. It transports us, gives us characters, we live their lives and trials. Fiction entertains, spurs passion and conflict.  Good fiction makes an eight-hour flight across the Atlantic pass in a blink. It provides a point of discussion between readers. With a bowl of soup and blanket, good fiction turns a rainy afternoon into something wonderful.

A research paper doesn’t. Of course, it never really tries to—research serves a different purpose in our lives. Research distills data, contextualizes it into a field of study, a body of work; it provides the next chapter of a ‘science story’ that stretches back centuries.

Research reflects our best understanding of how the universe works.

Whoa. The freaking universe. And how it works. That’s actually pretty cool.

So, fiction and science are both awesome in their own ways, each serves a purpose, and it seemed to me when I took up fiction writing, that my experience with scientific writing wasn’t particularly relevant. (After all, JI had it on good authority that I can’t write, certainly not about castles and dragons.)  But I gotta say—piece after piece of my scientific training has fallen into place as a usable tool in fiction, and that’s been one hundred percent gratifying to discover.

That discipline is invaluable in fiction writing. Maybe some writers don’t need it, maybe they can fall into ‘the zone’ and write a story effortlessly in one fell swoop. There are even accounts of this sort of thing, but they’re rare and barring that sort of experience, getting the word-mush out of the brain and onto the paper requires typing. It requires discipline. The chance of some grand inspiration striking on any given day is very low.

And getting the word-mush into concrete form is great, but a first draft is hardly ever anything to write home about. Hey, at least it’s on paper! But it needs work. Word-smithing, clarification, grammar and syntax, more forceful rhetoric, and so on and so forth. It might even need structural work.

In writing up a science article, sometimes you see a problem in the Results section and realize it actually has more to do with the set up you put together in the Introduction. You thought you were writing a paper on basal productivity in a peat bog, and you came to realize you were actually writing about ecosystem hierarchies. So all the data you thought you needed about carbon capture never really belonged in this article the first place. And that other data, the stuff you set to the side because you had the wrong idea of your paper’s thesis, does.

Same thing can happen in fiction. Some people have a term for this, they write ‘to discover the story.’  You might think you’re writing about global politics and how they impact every single person alive, but it turns out the real story, the one that matters, which you were writing all along without realizing it until you did, was a story about Uncle Ned trying to save his farm. So, you cut chapters and swap characters. You drill down into the anguish of Ned’s failed corn crop. The entire story becomes different. But you couldn’t have found that story until you wrote the first draft, and then rewrote that draft.

Maybe research should be first on this list, not third. I don’t know, but either way there’s gonna be research involved no matter which kind of writing we’re talking about. In science, research is foundational, it goes without saying that a huge part of the scientific method is research. Testing hypotheses, doing experiments, that’s research. Less obvious, especially to new students (hello, past me!), is the need for library research. Literature searches, finding all the pertinent work ‘out there.’ Nothing’s worse than a poorly-researched or error-riddled science paper. Unless it’s a poorly-researched novel!

It’s important to get details straight, in science for sure, and also in fiction. You’ve written a portal fantasy and the elves can shoot three arrows at a go? Great! Readers still expect the arrows to follow the physical laws of the universe—don’t go having the arrows circumnavigate the globe, because even in elf-land that wouldn’t be realistic. Or if your elf kills an orc, readers expect the orc corpse to follow certain rules.  (It’s true! Orc corpses follow the same rules as human corpses, in case you were unaware.) Don’t go making your orc-corpse cold and stiff straight away. How long does it take for a corpse to grow cold, anyway? I have no idea. You’ll need to research that, and you’ll need to use those facts instead of the ones you made up.

Fourth. Ninety percent of the work will be discarded (or invisible).

So, okay, Hemingway even had a term for this—the iceberg theory. Basically, the final written version of a story is a small fraction of what’s in the author’s head. An author knows character motivations, histories, relationships. An author knows setting details that are never explicitly laid out. An author knows all the ins and outs of their magic system. The totality of that knowledge gives a novel realism, it’s beneath the surface, invisible but there, and only a small percentage of what an author knows makes it into the written story.

In science, same thing. You do twenty experiments and find that two or three really hit the mark. They are so elegant, the data so clear and clean, theseare the ones that end up forming a paper. Those other seventeen or eighteen still exist—they are still part of the scientist’s thinking. They might even make it into Supplemental Materials, online. But really, who looks at the Supplemental Materials?

Learning to leave those experiments out of the spotlight was very hard. First paper I ever wrote, I tried to include every single one. Each had cost me blood, sweat and tears; each had been paid for by the US taxpayer and each seemed worthy, to me, of inclusion. Nope, too bad, wrong approach. Learning to set ninety percent of my work to the side, in the interest of concise communication to move the larger conversation forward, was essential to writing good science and absolutely invaluable in fiction.

Any good piece of science involves multiple experts, and they have contributing students and postdocs. Papers are usually written by authors, plural. Earning a PhD requires working with a mentor, teaching students, networking at conferences, and on and on, until the whole beautiful process brings together people from altogether different fields of study!  Imagine combining atmospheric modeling with microbial nutrient cycling, or cell signaling cascades with assortative mating. A cross-disciplinary match-up can lead to new ideas, like making vaccines from soybeans.

It’s the same thing in fiction. People say writing’s a solitary pursuit, and yeah, okay. But it’s also true that collaborating with writing partners, finding mentors, taking classes and attending conferences and workshops, seeking online support or local writing groups, using alpha readers and beta readers—these things all contribute to a final product. Look at the acknowledgement or dedication in the last book you read. The author recognizes the people in her life that impacted the story, and the list is often long. And when a piece of fiction is picked up for publication, it’s edited, just like in science. Another pair of eyes to improve the final product.

So. In a nutshell, that’s some of the overlap I’ve discovered. This is far from an exhaustive list, and for sure there are differences between science writing and fiction. But the bottom line is that the skill set from one has been so incredibly useful to the other, and the transition from a career in science to fiction ended up being fairly straightforward.

What an incredibly comforting discovery! And you know what—at times I even entertain the notion that my high school English teacher might have been mistaken.

View all posts by ptavormina